Treasures of the MGH Library and Archive, no 17: A postcard from Lambarene

This treasure of the MGH archive is a postcard with a view of Lambarene in the African state Gabon, dated July 2, 1951. On the back is written: „Dear Herr Baethgen, I am making use of a short visit in Königsfeld to send you this card and the packet for the Monumenta G.H. I hope that it arrives intact and that it doesn’t cause you too much work to go through the letters. I would be most grateful if you would notify me that you have received the package. With thankful greetings, Helene Schweitzer-Bresslau.“

In 1951, Helene Schweitzer-Bresslau was 72 years old. She was the daughter of Caroline Isay and Harry Bresslau, a recognised historian and charter-specialist of his day. As a German citizen of Jewish descent, Bresslau faced a life-long struggle for social acceptance. In the Berlin anti-Semitism debate (so-called „Berliner Antisemitismusstreit“) of 1879/80, he responded objectively to the polemical writings of the historian Heinrich von Treitschke with the publication of an open letter. Harry Bresslau was a member of the central board of directors of the MGH from 1888 until his death in 1926. Besides his editorial work, he earned special merit for the MGH with his „History of the Monumenta Germaniae historica“ („Geschichte der Monumenta Germaniae historica“) published in 1921. Having been entrusted with this task by the central board of directors, he spent years researching an immense quantity of archival material to produce this truly „monumental“, 750 page commemoration of the first 100 years of MGH history.

But how did the postcard from Lambarene end up in the MGH archive? 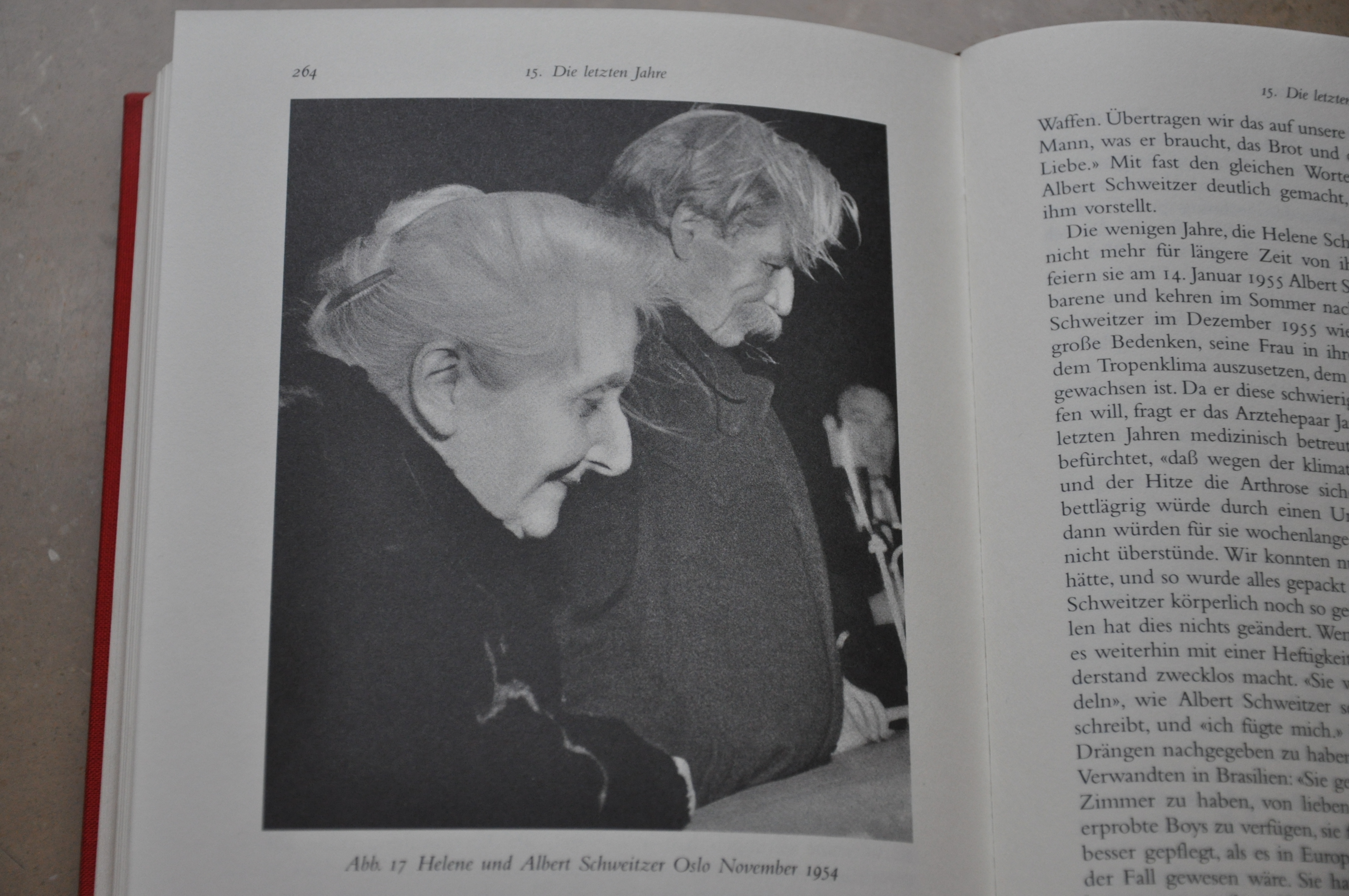 Albert Schweitzer and his wife Helene in November 1954 after receiving the Nobel prize, admiring the spectacle of the 30,000 people with burning torches marching in honour from the Rathaus balcony.In 1921, Harry Bresslau’s daughter, Helene, married the famous philosopher and physician Albert Schweitzer. In a letter to an English friend some time later she wrote of the vision that she shared with her husband: „We were joined in the mutual feeling of accountability for all the good that we had received in our lives and in the consciousness that it was our duty to repay this by helping others.“ Following this calling, the young couple went to Gabon – at that time part of French Equatorial Africa – in 1913. With Albert working as medical doctor and theologian assisted by Helene, who besides university studies had completed a course in nursing, they started treating patients in the chicken coop of the French mission Andende: Thus began the famous jungle hospital in Lambarene! Suffering tuberculosis exacerbated by the strenuous climate in Lambarene and the hard conditions of life during the First World War, and weakened after the birth of their daughter Rhena in 1919, Helene Schweitzer-Bresslau was forced to leave her husband’s side. She spent the rest of her life moving between the family house in the Black Forest and later in Lausanne, where she moved to with her daughter in 1933, France, international trips and short visits to Lambarene.

Strewn throughout the world

Harry Bresslau’s widow, Caroline Bresslau-Isay, survived her husband by fifteen years, living until her death in 1941 in Heidelberg. Her eldest son, Ernst, emigrated to Brazil in 1934 with his wife Luise Bresslau-Hoff; her younger son Hermann died in 1913. As far as can be discerned, Harry Bresslau’s voluminous literary estate was divided up between his daughter Helene, who stored it partly in the Black Forest and partly in Lausanne, and his son Ernst, who took the rest to Brazil.

On May 28 1951, Helene Schweitzer-Bresslau wrote to the then MGH president Baethgen: „I dare say that after so many years you probably don’t remember me.“ This was not the case: Baethgen responded immediately „... of course I remember you very well, just as I have a very lively memory of the whole household of your highly esteemed father. I hardly need to add that I would be more than happy to assume custody of your father’s estate as a deposit for the Monumenta Germaniae and indeed I consider this a great honour.“ This answer must have been a relief for Helene Schweitzer-Bresslau. On June 21 1951, writing from her parental home in Gusbach/France, now housing the Musée Albert Schweitzer, she assured Baethgen: „As soon as I return to Königsfeld – possibly within the next month, although at the moment I can’t tell you the exact date – I shall arrange that you be given the part of my father’s scholarly correspondence that is destined for the M.G.H.“ Our postcard was sent with the packet materials from Königsfeld im Schwarzwald on July 2 of that year.

Two weeks later, Helene Schweitzer-Bresslau wrote again to Friedrich Baethgen, confirming that the her father’s letters could be used for scholarly purposes: „I wish to thank you from the bottom of my heart for your friendly response and your readiness to take charge of the letters, and I hope that no burden will arise for you on this account.“

Below these words, her husband, the later Nobel laureate Albert Schweitzer inscribed a personal greeting in his small, concentrated handwriting: „Dear Herr Baethgen. I am compelled to tell you how very happy I am, that the letters of my beloved father-in-law, such as are related to the Monumenta, are now there where they belong. I know very well that he not only worked for the Monumenta, but also loved them. With cordial greetings, yours sincerely Albert Schweitzer.“

The efforts to sort through Harry Bresslau’s Nachlass were revived a few years later at the instigation of the Westdeutsche Bibliothek (now the Universitätsbibliothek) in Marburg. The journey of this collection through many hands and lands is documented in its present form in the MGH archive.